How no-code changes the tech space 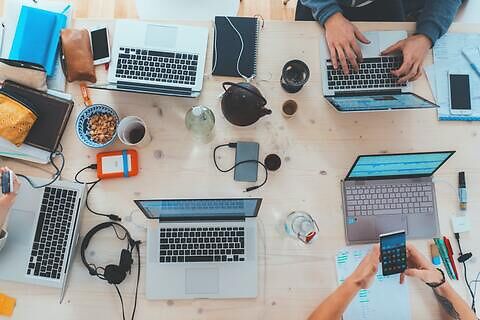 Over the last two years, we have been strong advocates of democratizing software development in Switzerland, allowing forward-thinking people to make applications without the need for coding.

To provide some insight about no-code's impact, you only need to look at the figures.

The industry is set to be worth $22 billion by 2022 and will account for 65 percent of app development by 2024. Not only solopreneurs but established businesses, intrapreneurs, and innovation teams are turning to no-code to power their next business idea.

But how has no-code become such a vital component in the tech world? From humble beginnings to playing a major role in the app development landscape, we’re charting the rise of no-code and what the future holds for the space.

It was acceptable in the Eighties

The term "no-code" has burst onto the cultural lexicon, but it's by no means a new concept. In fact, you need to go back to a time of gigantic mobile phones, permed hair, and spandex to discover no-code's roots.

The first-ever version of Excel spreadsheet was no-code in its purest form and allowed experts to manipulate data, analyze trends, and turn them into visual aspects, all without any coding. Of course, it wasn't referred to as "no-code" during this time, and it was nothing like what it has evolved to today. But we can look to the success of Excel and pinpoint the start of no-code's rise.

Fast-forward a couple of decades to 2003, and the no-code movement continued – albeit without an official name. WordPress fueled the fire, allowing people to create websites without writing a line of code. WordPress's impact was so impressive that, even today, 35 percent of the world's websites are powered by the open-source software company.

2005 saw the launch of YouTube, which evolved the no-code space further. Today, the video giant gets two-billion users each month and is owned by Google. But it was also one of the first platforms that let people put videos online without going through complicated lines of coding.

From FileMaker Pro to Zapier: how no-code evolved

While the space still didn't have an official name, different pieces of software were powering no-code. FileMaker Pro was essentially an early no-code tool, allowing people to easily organize data in screens, layouts or forms, while Google Sheets has become one of the most-used no-code services without people even realizing that it is indeed powered by no-code.

By 2015, the term "no-code" surfaced in the tech world. But it wasn't until 2019 that it became common terminology. Co-founder and CEO of Webflow, Vlad Magdalin, is primarily credited with bringing the term into the mainstream with the No Code Conf.

Apps like Zapier, Bubble, and Integromat have further evolved the space – and no-code's reputation – by powering automation and making integration between apps more accessible. There is now an endless number of no-code tools that allow you to build web apps and power business ideas.

No-code lets you build software applications without coding. It’s an alternative to traditional software development for non-technical people. It’s especially popular with startups and small businesses who perhaps don’t have the financial capabilities to hire tech teams or are time-sensitive in their approach.

It also appeals to coders and innovation teams, with technical-minded people who look for a faster way to start and test ideas using no-code. Instead of beginning with code, they create basic landing pages or products to determine whether their initial concept holds any weight.

Using no-code, people can build web and mobile applications on their own, speeding up processes while saving money. Dividend Finance addressed some of the biggest headaches in home improvement by handing out over $1bn of loans, and the entire business was built on the no-code platform, Bubble.

If you have no coding knowledge, you can use no-code tools to build applications and workflows and remove the complexity of programming. Even though these platforms use code, the user doesn’t need to worry about creating it with complicated lines of coding. Instead, the code works away in the background, leaving users with a clean and simple interface to create their magic.

What it doesn’t do

While the rise of no-code has accelerated at a rapid pace, it does have some limitations. No-code modules can be limited, reducing what the user is able to do – both visually and from a user-experience perspective. If you have more expansive thoughts about a business idea, no-code tools could limit capabilities.

No no-code app is the same, so you should understand your requirements and limitations before moving ahead with specific software. Otherwise, you might find that your needs don't fall in line with the particular attributes of the tool.

Just starting out? We have previously compiled a list of the most commonly used no-code tools.

The demand for simpler solutions

So why has no-code been such a resounding success and grown exponentially? The answer lies in its simplicity and accessibility. As we become more ambitious, we demand solutions that help us realize our vision without the need for software development teams and spiraling costs.

Before no-code evolved into what it is today, anyone with a business idea needed hard code to create websites and other online tools. This required either in-depth knowledge of how to code or the need for a software developer to bring ideas to life.

Most of the population doesn't have extensive coding skills (some estimates put the number at less than half a percent), which leads to a bottleneck for innovation. Subsequently, many potential game-changing ideas never see fruition.

The demand for coding far exceeds the supply of developers available, with 67 percent of businesses struggling to find the right talent for their projects according to a KPMG CIO survey. One way to combat this is by using no-code tools, with the number of available options increasing to help businesses build on ideas without relying on software professionals.

A new chance for startups

So who are some of the people that benefit from no-code? Early-stage entrepreneurs have been quick to embrace the tech, thanks to its ability to create software faster. That ease of use means that the learning curve is nowhere near as steep as learning to code. The result sees people finding answers to their problems and getting an idea to market while generating revenues faster.

It's also cost-effective, which gives people more access. Entrepreneurship has often proved costly and closed the door to business for many people. Traditionally, those with grand plans of starting their own company relied on help from family and friends to get the ball rolling.

A report from the State of European Tech revealed that people from a lower socioeconomic background are less likely to become entrepreneurs: 81% of founders surveyed were already well off before they founded their company. But no-code lowers the barrier for entry and solves an entirely new market of problems.

Not only can a greater number of people from less privileged backgrounds start building, but since an app now costs a fraction of what it did before, it's possible to create solutions to issues that don't need to become the next unicorn.

No-code projections for the future

In times of turmoil, the need to build simple and effective tools at speed increases. This has been reflected with the acceleration of no-code tools like Carrd, which played a pivotal role in the current Black Lives Matter movement.

Carrd’s capabilities meant activities and protests could build a site in minutes that offered resources for atrocities that happened as a result of police brutality. Another no-code project, Ensemble19, which we launched on the Bubble platform at the beginning of the Covid crises, helped local businesses sell vouchers to the public in order to access liquidity during the shutdown here in Switzerland.

Yet, it’s not only during a time of crisis where there is a need for faster development cycles. A report from CB Insights reveals that 42 percent of startup failures are the result of there being ‘no market need’ for a product.

And while no-code doesn’t help you find a viable business model directly, it does let you build cheaper and quicker. Therefore, you can validate an idea in a few months rather than a few years and pivot faster too.

As the no-code movement continues, we're likely to see a boom over the next decade enabled by the new possibilities these tools offer. With the improvement of technology, an even greater number of options will come to the market and offer innovators the chance to realize their ideas at speed. The stats certainly back this up:

Who are the major no-code developers powering the rise? Bubble is a drag-and-drop builder with a simple interface that lets people create their own software applications. Airtable simplifies the creation of databases so that you can create and share them without the need for scripting or understanding SQL. And Webflow delivers cleaner code and turns a novice webmaster into a design pro without restrictions on design. Want more? I’ve written a separate blog post about what no-code tools you might want to try out in 2021.

What does the future hold for coding?

No-code companies are raising capital at impressive rates: Plato has raised $3.3 million, while Dividend Finance increased its funding capacity to $350 million. Big brands like Apple are also getting in on the act. The tech giant has invested in no-code with its subsidiary company, Claris.

The demand for software applications is increasing each year, and the number of innovators and companies of all sizes in the space will increase further. Using no-code will offer a competitive advantage while saving time and money on applications for a larger group of people as it becomes more embedded in the tech landscape.

Some have referred to it as the “second digital revolution”, and we can expect evolved builders and more innovations in the no-code space in the future.

But for a definitive take, it’s best to lean on the words of former Github CEO Chris Wanstrath,

“The future of coding is no coding at all”.